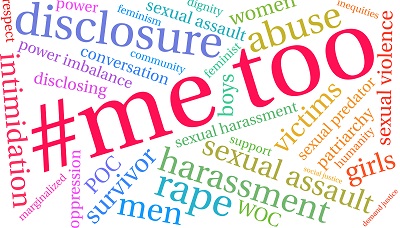 The title of this blog says it all.  It’s impossible to ignore the #metoo movement.  Every day, women, some famous and many who are not, are coming forward with accusations of sexual harassment and assault. Almost daily there are reports of men that have been fired from their jobs because of allegations of sexual harassment and misconduct.  South of the border, Time magazine’s  person of the year was The Silence Breakers.  The entire issue was dedicated to women who had broken their silence about the harassment and abuse they had suffered at the hands of powerful men. More recently in the province of Ontario, the leader of the Conservative party resigned his position because of allegations of harassment and misconduct.  This week the Canadian band Hedley announced that they will be breaking up at the end of their current tour amid accusations of sexual misconduct.  Women are coming forward and saying enough is enough.

Coming Forward and Speaking the Truth

Coming forward takes incredible courage.  Speaking the truth about your experience is not easy, but please don’t put yourself in a vulnerable position by taking a stand.  When reading about the movement there is much praise for the women who are stepping forward.  And so there should be.  What appears to be lacking however is an acknowledgement that women should not feel pressured to join the fight. This decision can impact your family, career, reputation, mental health and many other things.  It is OK not to do anything, just as it is OK to do something about sexual harassment or misconduct.  Access your support network of friends and family to help with the decision.  Make the decision that is best for you.

If you need support around this issue or any other please contact Annette by clicking the link or calling 905-520-5859.

Next Is this my life? Expectations at 30!
Previous PTSD – Why can’t I remember?

Your contact information is strictly confidential and will never be shared or sold.

Happy New Year!  Each year begins with expectations of change and hope that will be better than the last.  Many people make resolutions only to find themselves not meeting their goals very early on in … END_OF_DOCUMENT_TOKEN_TO_BE_REPLACED

What she cares about

Genuine, direct and honest. That's how clients describe Annette Poechman. Her approach to therapy is simple. It's all about you! You set the agenda, she listens and provides you with the guidance you need. Annette's goal is to make your session a … END_OF_DOCUMENT_TOKEN_TO_BE_REPLACED